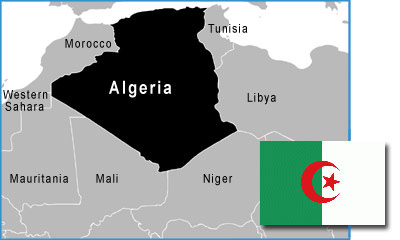 Algeria gained independence from France in 1962 after a lengthy war. A one-party socialist regime, The National Liberation Front, has largely controlled the politics of the country since. In the first multi-party election in 1991, Islamists won, but the army intervened to prevent the second round of elections. Civil war ensued, resulting in more than 100,000 deaths before the government regained control.

The Berber people of Algeria are the country's original inhabitants. Today, they live mainly in Algeria's mountainous Kabylie area in the north, while Arabs inhabit the rest of the country. The Christian faith has a long history in North Africa, especially among ethnic Berbers. The early church father, Augustine of Hippo, was believed to have been a Berber from Algeria. However, after invasions by Arab Muslims, much of Algeria's public Christian worship and witness have disappeared. Today, many Berbers in Algeria are rediscovering their Christian heritage and the church is growing rapidly.

Algeria is a shining example of church growth in North Africa. It is also a leader in the region for theological training and church development. Nearly all of this growth has occurred within the Berber community. Most churches are allowed to meet freely in buildings; however, in 2018, the government temporarily closed many of them and harassed congregations. Berber Christians, who are being monitored carefully by governing officials, have gained a collective voice by joining under the umbrella of the Algerian Protestant Church Association. Although sharing one's faith with non-believing Arabs can pose great risk of persecution, Berber Christians continue to share the Gospel boldly in and around al-Qaida camps. Secret communities of Arab Christians exist throughout the country.

The Voice of the Martyrs Canada facilitates its Theology of Persecution training seminars to help pastors, church leaders and seminary students become more informed and effective in ministry. VOMC also provides practical aid for the repair and restoration of decimated church buildings when necessary.

Pray that God will use the current restrictions to draw many more Algerians into a relationship with Christ. Pray for conversions to Jesus among the country’s powerful Islamist leaders.

Pray Algerian believers will respond to pressure with faith and perseverance.

Pray for the nation's young people, who make up a large percentage of the population in general, as well as the majority of Christians. May they not be frustrated or disillusioned but rather strengthened and encouraged in Christ Jesus.