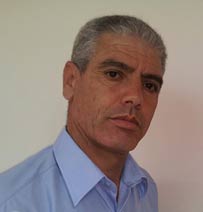 A Christian in Algeria has been sentenced to five years in prison -- the maximum term -- and given a heavy fine for blasphemy against Islam and its prophet in a social media post. Slimane Bouhafs, 49, appeared before a judge on August 7th in the eastern town of Setif within the Kabylie region, home to most of Algeria's tiny but fast-growing Christian minority.

Slimane was arrested on July 31st for posting a message on social media about the light of Jesus overcoming the "lie" of Islam and its prophet. He also published photos showing the execution of a civilian by an Islamist terrorist. Such material is judged by the authorities as an insult to Islam, the state religion in Algeria according to its Constitution. The penal code allows for a penalty of three to five years in prison, along with a heavy fine, against anyone convicted of insulting Islam and its prophet Muhammad.

The news of Slimane's sentence was a shock for his family who denounced what they called a "sham" trial. His daughter, Afaf, describes her father as a man who has always defended the interests of his country from a young age. She says he is known for his commitment to democracy and religious freedom through all of his writings published on Facebook.

Slimane's family members are deeply concerned, as he suffers from a chronic illness and his health may deteriorate in prison. According to his daughter, he suffers from inflammatory rheumatism, a disease that typically worsens under stress. The president of the Protestant Church of Algeria says its lawyer will be appealing the verdict.

Ask God to minister to Slimane and his family, while mediating on his behalf throughout the appeal process. May the Lord's peace and protection be experienced by each one, including the representing lawyer, as they seek His wisdom and ultimately place their trust in Him regarding the outcome. Also intercede on behalf of Slimane's health concern, asking the Great Physician to grant him needed physical strength and healing.

The Voice of the Martyrs Canada facilitates its Theology of Persecution training seminars to help pastors, church leaders and seminary students become more informed and effective in ministry. VOMC also provides practical aid for the repair and restoration of decimated church buildings when necessary.

Pray that God will use the current restrictions to draw many more Algerians into a relationship with Christ. Pray for conversions to Jesus among the country’s powerful Islamist leaders.

Pray Algerian believers will respond to pressure with faith and perseverance.

Pray for the nation's young people, who make up a large percentage of the population in general, as well as the majority of Christians. May they not be frustrated or disillusioned but rather strengthened and encouraged in Christ Jesus.