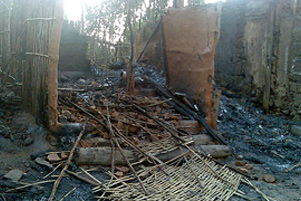 When the popular Hindu swami (religious leader), Lakshmanananda Saraswati, was killed in August 2008, Maoist rebels claimed responsibility for the attack. Despite this claim, Hindu militants turned their anger towards the Christians of Odisha state (then known as Orissa). Riots exploded, particularly in the Kandhamal district. Hundreds of Christians were massacred, thousands were forced to flee for refugee camps, and an estimated 1,400 homes -- along with at least 90 churches and numerous businesses -- were destroyed. In the months that followed, The Voice of the Martyrs Canada provided needed relief aid, along with long-term support for the many surviving children of those who had been killed.

It didn't take long for officials to arrest seven Christians and, at a later date, one Maoist rebel, for committing the crime. All of them were convicted for the swami's murder and sentenced to life in prison. For the past ten years, the seven accused Christians have maintained their innocence but to no avail. Appeals have been filed and rejected. One of the accused believers, Gornath Chalanseth, appealed to the Odisha High Court but was rejected last December. He was finally able to appeal to India's Supreme Court, which ruled in his favour on May 21st, resulting in Gornath being freed on bail.

"My joy has no words," Gornath cried as he was welcomed by his wife and others at the prison gates. At the same time, he is mindful of the six Christians who are still imprisoned. "I am happy to have my freedom again, but there are other innocent people in prison," he lamented. While Gornath has not been acquitted of the crime, there is no deadline for him to return to jail unless ordered by the Supreme Court.

Praise the Lord for this favorable ruling and that Gornath has been freed to return to his wife and family. Continue to uphold the others who are still languishing in prison after all these years, as well as their families and friends who continue to suffer during this lengthy time of separation. Pray that the truth will be revealed to the judicial authorities so that those who've been wrongfully accused will be fully acquitted.