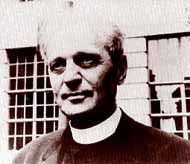 It was 1945. A pastor and his wife sat listening as one religious leader after another come forward to swear loyalty to the new regime at a national church conference called by the recently installed Communist government in Romania. Although they knew that the Communists had sworn to eradicate religion, the delegates publicly declared how happy they would be to cooperate with the government.

As the pastor’s wife listened, she was shocked. Hadn’t communism shown its true face in Russia? At least, she thought, these men could remain silent in their fear for their families, jobs and salaries. But this flattery was tantamount to spitting in Jesus’ face!

She could tell that her husband was boiling inside. So, she turned to him and said, “Will you not wash this shame from the face of Christ?”

“If I speak, you will lose a husband,” he replied.

“I don’t need a coward for a husband,” she answered.

And with Sabina’s words ringing in his ears, Richard Wurmbrand advanced to the front of the auditorium, calling the Romanian church to renewed faithfulness to the Lord. He became a marked man for having the courage to raise a voice against the prevailing attitude of compromise and accommodation that lured so many and proved so deadly for the church in Romania.

In the years that followed, both Richard and Sabina suffered terrible persecution for having the courage to remain true to Christ in a sea of godlessness. After Pastor Wurmbrand was finally released from prison in 1964 in a general amnesty, friends in the West offered to ransom the family for $10,000 USD.

In his book, Tortured for Christ, Richard writes, "I would not have left Romania, despite the dangers, if the leaders of the Underground Church had not commanded me to use this opportunity to leave the country, to be the ‘voice’ of the Underground Church to the free world. They wished me to speak to you of the Western world on their behalf about their sufferings and needs."

Voice of the Underground Church

Despite the Communist threats and the criticism of some Western church leaders, Richard Wurmbrand bore witness to the sufferings of those who endured communism.

Within his first year in the United States, Pastor Wurmbrand was detained twice for “disrupting” pro-Communist rallies. He was called to testify before the Senate, stripping to the waist to reveal the scars of 18 embedded wounds from the frequent tortures. Some Christian leaders called him a lunatic; one who had lost his mind in the confines of a solitary prison cell. To others, he became “Iron Curtain Paul” or the “Voice of the Underground Church.” A reporter with the Philadelphia Herald said of Wurmbrand, “He stood in the midst of lions, but they could not devour him.”

In October 1967, with $100, an old typewriter and 500 names and addresses, Richard Wurmbrand published the first issue of The Voice of the Martyrs newsletter. This small publication was dedicated to communicating the testimonies and trials facing our brothers and sisters in restricted nations worldwide.

This newsletter was like no other. Readers would write to the Wurmbrands appalled at the atrocities he described. “How could this be true?” they asked. Others said the newsletter gave them nightmares and asked not to receive it. But those who looked beyond the sufferings and tortures saw a beauty—a beauty in the hearts of men, women and even children who refused to renounce Christ. Readers also witnessed a living faith that enabled men like Pastor Wurmbrand to “kiss the bars” of their prison cell, to rejoice in the fellowship of Christ’s suffering.

Yes, it was important to the Wurmbrands that Christians in the West provide assistance to their persecuted brothers and sisters. Bibles, Christian literature, funds to help the families of martyrs or those whose father and/or mother was in prison for their faith, and radio broadcasts with solid biblical teaching for those cut off from such spiritual nourishment were the major projects in the early days of The Voice of the Martyrs.

When the mission formalized its five main purposes, one of them read, “To emphasize the fellowship of all believers by informing the world of atrocities committed against Christians and remembering their courage and faith.”

Today, The Voice of the Martyrs continues the legacy of Pastor Wurmbrand in raising a voice for persecuted Christians around the world. It is sometimes hard for Christians in Canada to understand that persecuted Christians do not want us to send all of our funds directly overseas! They urge us to publicize their plight, to tell their stories, to urge governments to intervene on their behalf and to share their prayer requests with Christians in Canada. One of our core values as a mission is to serve the persecuted Church according to its wishes and needs, and not according to our own predetermined strategies.

Just as Pastor Wurmbrand left Romania at the command of underground Church leaders to be their voice, we are fulfilling the command of today’s persecuted Church as we share their stories in our monthly newsletter, in books, on the Internet and through television and radio.

Join us in raising awareness of the persecuted Church today!