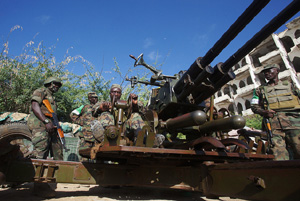 Although the army is combatting terrorism, the true battle is a spiritual one.

The data, compiled by the Africa Centre for Strategic Studies, showed that al-Shabaab was responsible for 4,281 casualties in 2016, compared to 3,499 committed by Boko Haram. The third group on the list was the Islamic State militant group which was responsible for 2,350 deaths that year.

Al-Shabaab, which has ties to al-Qaeda, is largely operational in Somalia with some incursions in neighbouring Kenya. (To read last week's report on a recent incident in Kenya, click here.) The group was also responsible for a mass attack that took place in April 2015, tragically killing nearly 150 Christian students at Kenya's Garissa University. In 2013, the militants carried out a three-day siege, causing 67 fatalities at a shopping mall in the Kenyan capital of Nairobi.

The Intergovernmental Authority on Development declared al-Shabaab as a transnational security threat in the East Africa region last year. Additional reports on the terrorist group's persecution of Christians in Somalia are available here.

May the Lord respond to the cries of His people in Somalia, Kenya and Nigeria by mightily intervening on their behalf -- contending with their enemies and working out a plan of deliverance from the violence that's being perpetrated against them (Psalm 34:7). Pray that He will frustrate the evil plans of the terrorists, replace the hatred in their hearts with His overwhelming love, and bring many to conviction and repentance. In keeping with His Word, may He ultimately work all things together for good to those who love Him (Romans 8:28), also drawing many to Himself during this time of suffering and political uncertainty.

VOMC provides support to generate, produce, and broadcast two consecutive half-hour shortwave radio programs directly into Somalia. One of the programs focusses on an evangelistic approach, while the other features basic Biblical teaching to encourage new believers and further their spiritual growth.

Please join us in praying for our ministry partners who are effectively reaching Somalians through the multiple radio broadcasts, specifically asking God to further strengthen and equip them so they can continue with their vital outreach work. Also, pray that the hearts of those yearning to learn more about the Lord will be greatly encouraged through the broadcast messages. May these spiritual seekers be shielded from all harm, while their lives are being radically transformed by the ongoing work of His Holy Spirit.