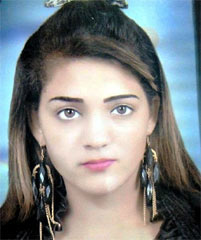 The family of a kidnapped 18-year-old Christian woman, who has been missing since January 26th, accused the police of complicity in her kidnapping after the authorities failed to take action against an alleged suspect who admitted his involvement in the crime. The young woman, Hanan Girgis, was found missing from her family home in Esna, a village of Upper Egypt, when some of her brothers returned during the night.

After a search failed to locate her, Hanan's brothers and their lawyer made a formal complaint to the police, suspecting a neighbour, Mohamed Ahmed Nubi Soliman, of her kidnapping. Prosecutors summoned the accused 27-year-old man who admitted a connection with the abduction. However, he was released due to lack of physical evidence. And although a national security investigation was ordered, according to the family's lawyer, there has been no progress with the case, despite protests outside the police station by the missing young woman's friends and family.

During the protests, security forces used a fire station car and unnecessary violence to disperse the crowd. In addition to arresting 20 people, several of the protesters were badly injured. Of those arrested, five were released later the same day; the rest were freed the next day due to the intervention of church leaders. "(Members of the security forces) broke the leg of my 23-year-old brother and wounded my older brother...who's 28," states Rezeiky, one of Hanan's concerned siblings. The young man adds that they "dragged my mother and beat my three aunts." Two other relatives, Shahin and Ayman, were also hurt at the scene.

Rezeiky has been told by the Civil Status Authority at Esna Police Station that his sister Hanan now has a new Muslim identity and is being held by the security services. The family's lawyer accused the police of "complicity and apathy" in the case, adding that "because the victim is a Christian girl, we see inaction." To learn more about the difficult challenges facing followers of Christ in Egypt, please visit our online country report.

Pray for Hanan's protection and peace as she awaits deliverance from her captors. May all her fears be washed away, enabling her to explicitly trust the Lord for His divine intervention. Ask that no harm will come to her while in captivity, nor to her family and friends who are diligently pleading for her release. In the meantime, also intercede for the kidnappers, praying that they will come to know Christ as their personal Saviour through her exemplary testimony. May the enemy's work be divinely intercepted -- turning Hanan's circumstances around for good and the fulfillment of God's higher purposes.

VOMC works with international partners to provide a safe place of refuge, counsel and discipleship for Christians from Muslim backgrounds who have been forced to flee their homes due to religious pressure from their families, and/or experienced ostracization from others in their communities because of their identity with Christ. VOMC also helped fund an initiative that empowered persecuted Christian women by helping them increase resilience to daily discrimination and achieve financial independence so they can support their families.

Pray on behalf of those who are facing economic and social challenges because of their Christian faith. Ask the Lord to provide for their spiritual and practical needs – further strengthening and emboldening them so they can effectively share the message of the Gospel with others in their communities. May the hearts of those who hear it be open and receptive to the wonderful truths contained in God’s Word.

Egypt: Faithful To The End