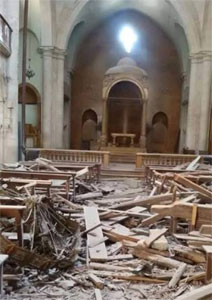 A Syrian church that was destroyed in attacks by rebels.

Here is an encouraging message from our Arabic broadcasters in the Middle East....
Despite the mass exodus of many Christians, the church is far from empty in Syria, Iraq, Jordan and other parts of the Middle East. God has been very faithful. There are strong Christian believers remaining, and tremendous growth is taking place in the lives of new believers who were Muslims. The presence of the church is vitally important. People are desperate and see very little hope, but the fact that there still is a church gives them encouragement and hope.

Historically, Middle Eastern Christians have made significant contributions for the good of society, especially in Syria and Iraq, going all the way back to the first century. Their contributions include working in the areas of health, literacy and the translation of the Bible into Arabic. They were among the first to introduce charitable works and work with missionaries and NGO workers. They are often recognized as the most honest when it comes to business and trade. In the future, Christians will be vital to maintain diversity and ensure sustainable peace and lasting stability in the Middle East.

We are in regular contact with our FM stations in Iraq and have talked with many people who have family in the Middle East. Some of our Middle Eastern broadcasters have shared testimonies with us (which they hear directly from listeners when visiting there). They are sharing exciting news of what God is doing in the Middle East. There are thousands upon thousands coming to Christ. May the Lord be praised and worshipped with great honour! He is worthy!