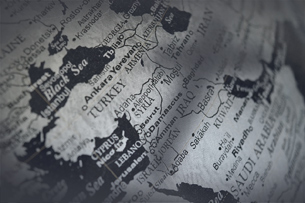 Pastor Abraham had been threatened many times for boldly sharing his faith with Sunni Muslims who were crossing the border from Syria. But the threats toward his family were becoming increasingly frequent and more serious. For several months, he had been dealing with mounting internal fear. He knew of no better way to combat that fear than to pray and ask the Lord for strength.

One day, while working outside his house with an electrical saw, the blade suddenly popped off and caught him in the mouth. Had the blade hit him a few inches lower, it could have severed an artery in his neck. If it had been a few inches higher, it could have blinded him. As he stood in shock for a moment, he sensed God's Spirit impressing upon him: "I am in control of when your life will end. Stop being scared." At that moment, Abraham's fears were calmed.

In the same area that Abraham had been ministering, an ISIS fighter named Fadi was recruiting Muslims to fight for the terrorist group. When several people at the refugee camp told him about the Christian evangelist, Fadi was infuriated. The ISIS terrorist decided to personally kill Abraham.

When Fadi appeared, walking towards the Christian's home, Abraham was ready. The Lord had prepared the evangelist for this moment: "Speak to (Fadi) strongly and directly; don't be afraid," he was admonished. As Abraham began to speak the words God had put on his heart, Fadi began shaking uncontrollably. "I want salvation," the convicted terrorist earnestly pleaded. Abraham assuredly told him, "Jesus will forgive you of your sins." On hearing this, Fadi began to weep....

The evangelist prayed with Fadi, whose life was dramatically transformed after accepting Jesus as his Saviour that day. Four months ago, the former terrorist was baptized at Abraham's church where he continues to meet for discipleship. The new believer has since led his wife to the Lord, and is now boldly sharing his faith with others at the refugee camp.