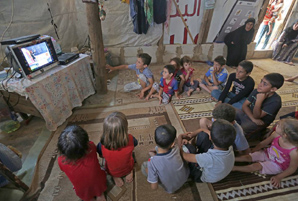 SAT-7, a Christian satellite TV ministry that is reaching many countries in the Middle East and North Africa, recently received new viewership statistics, and the results are exciting! While it is difficult to obtain viewership information for some channels, such as those reaching into Iran and Turkey, responses indicate significant growth in the Arabic ministry and the Kids' Channel.

According to the producers of SAT-7, this growth could be attributed to the viewers' desire for programming they can trust, as well as helpful information that's not limited to the views being presented by governing officials' sources.

SAT-7's president, Rex Rogers, believes one of the reasons for their success is the way they present their message: "You're not directly asking (viewers) to leave what they've been taught and what they're committed to culturally.... You're just sharing the positive claims to Christ and Christianity, and the Holy Spirit does the rest."

Remember the ministry of SAT-7 in your prayers, as the Gospel is being aired in many areas not easily accessible through other methods of evangelism.